Presumed Ocular Histoplasmosis Syndrome (POHS) is caused by exposure to the fungus, Histoplasma capsulatum, which grows in the soil. As part of its life cycle, the fungus releases spores into the air to reproduce. Some people who live in this area can inhale these spores into their lungs, and initially develop a pulmonary infection. Most patients will not remember the initial infection because it is similar to a cold or the flu, and they will have a full recovery. The fungus is mainly found in the Ohio River Valley, which includes all of Kentucky and parts of adjacent states. It is estimated that over half of people living in the affected areas have been exposed to the fungus. 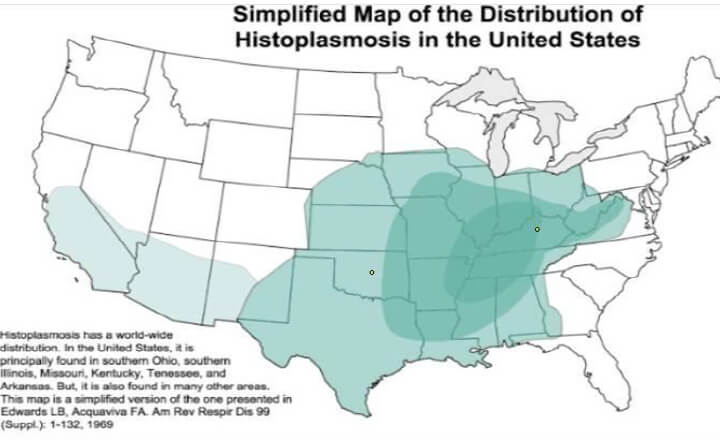 During the course of the initial exposure to the fungus, the organism can reach other organs by way of the lymphatic system or bloodstream. A small subset, estimated at 1.5%, of those with the initial lung infection will have any eye findings. Evidence of eye involvement includes focal scars in the choroid, a vascular layer middle layer of the eye under the retina. Although the fungus has not been recovered or identified in eye tissue, it is presumed to have been present or at least responsible for these focal areas of inflammatory scarring during the initial exposure to the fungus. Most of these scars become inactive and do not cause symptoms or problems, and are commonly seen on routine eye exams of patients in Kentucky. Another small subset, approximately 3.8% of those with eye findings, however, will get further vision threatening complications from this disease. In particular, those patients with scars in the central vision area of the retina (macula) can develop changes in these scars which affect central vision and cause significant vision loss. 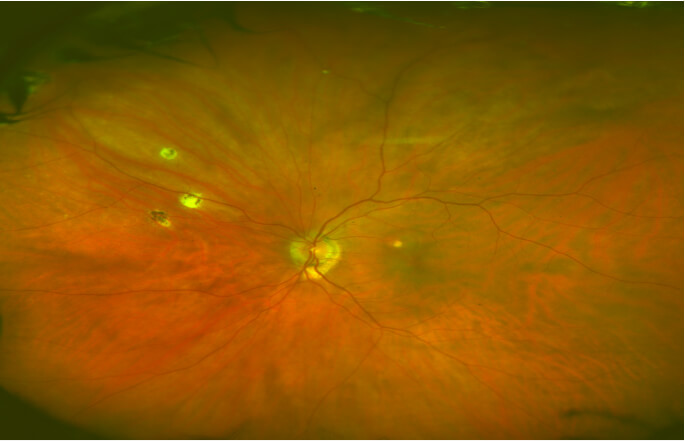 The change that occurs is the development of abnormal new vessels called choroidal neovascularization (CNV) which grow from the scars. These new vessels leak fluid and bleed into and under the retina causing further damage. In untreated cases of CNV, there can be severe loss of central vision and difficulty reading, driving, and recognizing faces of people.

Symptoms include distortion of reading letters and distorted or crooked lines that should normally be straight (metamorphopsia), blind spots, blurred spots, or dark spots in the central vision, double vision, or ghost images.

Eye examination may show the old histoplasmosis scars with adjacent fluid or hemorrhage in or under the retina.

Diagnosis is usually confirmed by photography tests in the doctor’s office such as fluorescein angiography of the retina and choroid, or Optical Coherence Tomography (OCT) scans which confirm the presence of the scars, CNV, fluid and hemorrhage. 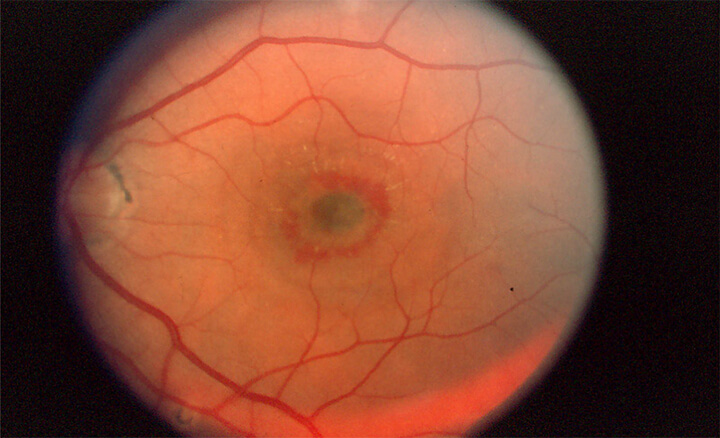 For active CNV in the macular area, the risk of severe central vision loss is high if left untreated. If the lesion is treated, the fluid and hemorrhage can resolve and the vision stabilize or improve. In the 1980s and 1990s the treatment available was primarily thermal laser. Laser was shown in an important NIH clinical trial to decrease the amount of severe vision loss in treated patients. Our practice treated many patients successfully with laser during this time period and published a paper in 1995 confirming the long term benefit of this treatment in patients treated in our practice. Today this treatment is only rarely used because of the development of newer more effective treatments.

In the 1990s, surgical removal of the CNV was used to help selected patients. Our practice was a participating clinical center for an NIH sponsored clinical study evaluating the effectiveness of surgical removal of CNV in Ocular Histoplasmosis. Today, surgery is occasionally used in certain severe cases but has largely been replaced with newer more effective treatments.

In 2004, a different type of laser treatment in combination with an intravenous drug was developed for CNV that is under the center of the macula. Photodynamic therapy (PDT) using IV verteporfin (Visudyne) was successfully used for several years. PDT is sometimes still used today for selected patients; however, it has been replaced in most cases by injections of special drugs into the vitreous of the eye.

In 2005, our practice was the first to use intravitreal injection of bevacizumab (Avastin) for active leakage from CNV in the Presumed Ocular Histoplasmosis Syndrome. This drug is an inhibitor of vascular endothelial growth factor (antiVEGF drug). VEGF is responsible for the growth and leakage of the abnormal CNV vessels. We reported the successful use of this treatment in a group of Ocular Histoplasmosis patients in 2007. Today most symptomatic patients with active CNV from Ocular Histoplasmosis will be treated with this drug. There are two additional intravitreal antiVEGF drugs that have been shown to be effective in arresting the leakage and growth of CNV in Ocular Histoplasmosis, including ranibizumab (Lucentis) and aflibercept (Eylea). Our practice participated in two separate national studies in 2009 and 2013 showing the effectiveness of these two additional drugs in this disease. Today they are also used to treat this disease. Treatment with intravitreal injections of antiVEGF drugs has greatly improved the visual prognosis in this disease and currently remains the standard of care for this disease.

There are three important points in the eye care for patients who have scars in the macula from Presumed Ocular Histoplasmosis Syndrome. Monitoring vision in each eye by using an Amsler grid test at home can detect early symptoms and result in early treatment. Also, patients should be seen yearly to monitor their scars with OCT testing looking for early fluid or hemorrhage activity around the scars. Recurrence of the CNV and need for retreatment is common, approaching 25% to 50% of those patients who respond well to initial treatment. Patients will often respond well to retreatment. 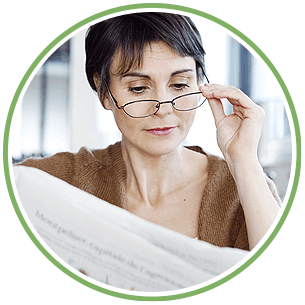 The retina times
Our latest Activity 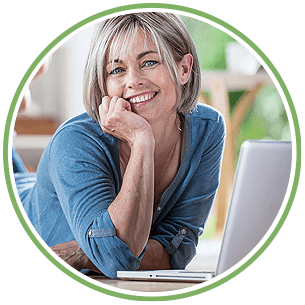 access our patient portal
Communicate with your doctor through a convenient, safe, and secure environment.